Why This Episode Exists

A few weeks ago, Joe Rogan (who gets something like 100 million podcast downloads per month) had an episode that essentially was titled 'Why Chiropractors are Bullshit'. His guest on the podcast was self-proclaimed science guru Yvette D'entremont, who goes by SciBabe.

[Full disclosure, I actually REALLY enjoy many episodes of Joe's podcast episodes. His podcast is one of my favorites]

The podcast episode was more or less a hit piece on the profession, but factually it was awful. I felt compelled to use The Movement Fix Podcast as a way to voice a rebuttal that is level headed and factual.

I think it is important to note the history of how this all came about. Joe Rogan said in a podcast he had been seeing his chiropractor for a year for a disc herniation in his neck. After it wasn't improving, he said 'hey this is BS' on the podcast.

The timing of when Rogan first spoke of this and Yvette's article is suspect. She is a 'popular' science writer and debunker online, whose career would be propelled by getting on a podcast as large as Joe's.

Perhaps she wrote this article after she heard Joe say that as a ploy to get on his podcast. So we must question the motivation of why this all came about in the first place.

Make a click bait title on a controversial topic and views, clicks, and ad revenue are bound to increase.

That is my theory on WHY this happened in the first place, in terms of Yvette getting onto the podcast to voice her opinion. I question the motive.

I am joined in this episode by Jeff Langmaid, DC. Jeff is the founder of The Evidence Based Chiropractor, where he educates chiropractors and other professionals on the current research as well as how to communicate that research to other medical professionals.

He currently works at the Laser Spine Institute in Tampa, FL, which is a large interdisciplinary clinic. He works closely with MDs, DOs, and other healthcare professionals in deciding which cases need back surgery, which should seek conservative care first, etc.

Check this place out:

Definitely a place that would hire 'quacks' who are useless, right?

In this episode we discuss:

Glucose Metabolic Changes in the Brain and Muscles of Patients with Nonspecific Neck Pain Treated by Spinal Manipulation Therapy: A [18F]FDG PET Study

Safety of Chiropractic Manipulation of the Cervical Spine: A Prospective National Survey

Chiropractic Education vs Other Professions

From the National Board of Chiropractic Examiners: To earn and maintain accreditation, chiropractic colleges must meet a variety of stringent requirements. Each program’s curriculum must include at least 4,200 instructional hours of course credits.

I have looked long and hard to find a comparison of DC and MD education hours. There is always this chart that pops up (displayed below).

I questioned whether or not it was accurate. And after searching long and hard, I could not find any dispute of the accuracy of this comparison. If it isn't accurate, please let me know.

The largest difference between the two professions, outside of the main educational courses (such as anatomy, physiology, pathology, biochemistry, neurology, etc) is the specifics for that profession.

Here is a chart I found to be most accurate based on all of this: 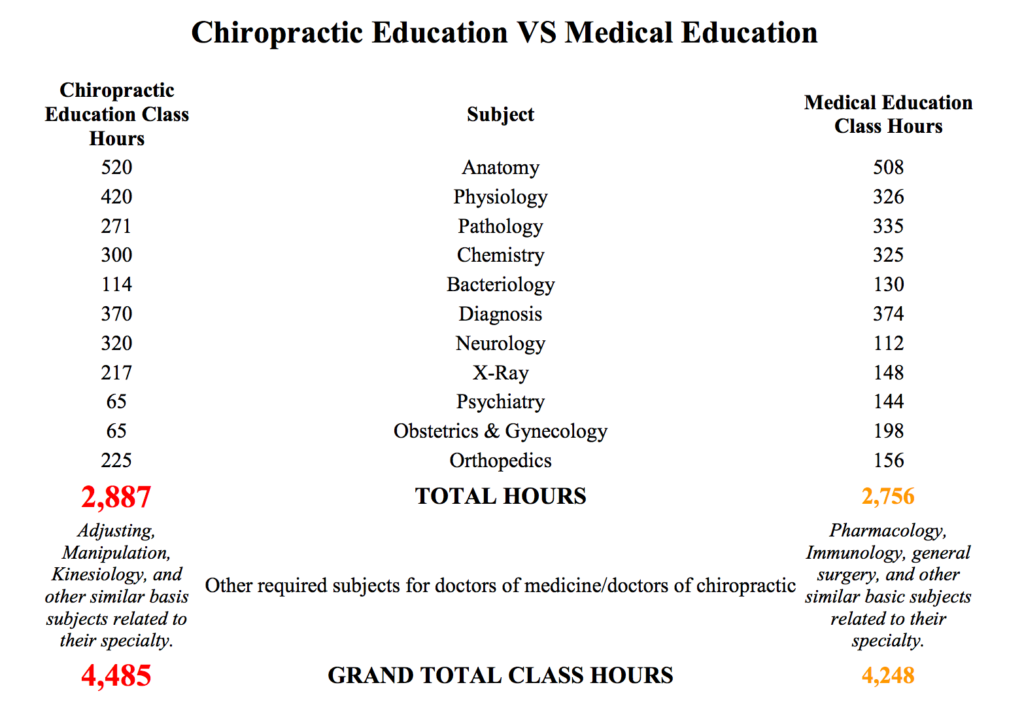 As the chart demonstrates, the hours of the basic fundamental sciences is very similar, but the differences are in the profession specific hours.

Of course, medical doctors have a residency after they graduate, which is a notable difference between the two professions and that shouldn't be under-emphasized.

What about the term 'Doctor' and title Dr

This is where things get interesting.

'Doctor' is an academic title, derived from the Latin verb docēre, which means to teach.

Different countries have different etiquettes around the term.

In Germany, for example, the term doctor (Doktor) refers to a research doctorate (like a PhD) and there is another term Arzt that refers to medical practitioners. That's the technical usage, but they use Doktor colloquially for physician.

In the United Kingdom, the term doctor isn't really even regulated, unless used in advertising to incorrectly imply someone has medical qualification. Terms that are regulated include: physician, doctor of medicine, suregon, among others.

In the United States we just can't figure out what we want to call people, although it's typically held for people who hold doctoral degrees.

Colloquially in the United States, saying 'I am a doctor' implies medical doctor. Using the title 'Dr.' refers to a level of education that could be from a number of degrees.

I hope those of you who listened to the podcast and read through this post found it useful.